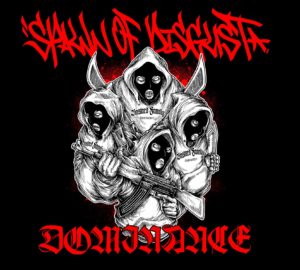 Back to the very dawn of time, mankind—and our primate ancestors before us—have killed, fought, slaughtered, beaten and tortured for one thing:

We have done the unspeakable to one another in efforts to assert our power and exertion over others. We’ve done it to impress the opposite sex, reproduce, expand our reach across the world and conquer nations. Mankind has its roots soaked in the sinister soil of bloodshed, and from that dirt, a towering behemoth of brutality has grown, with a span the likes of which stands to block out the sun. Therefore, it makes sense that the immense, aggressive, no-holds-barred display of beatdown brutality from European ultra-heavyweights Spawn of Disgust be named after mankind’s greatest export. Dominance is worthy of its name when it comes to disastrously heavy, world-ending, pissed-off music. That’s it. Really, you don’t even need to keep on reading—because you’ve just heard most of what Spawn of Disgust are all about. A brief ten minutes long, Spawn of Disgust fit a whole history of aggression and anger into six tracks, making Dominance a head-strong, heavier-than-Hell release that hits hard, hits fast and doesn’t stop hitting.

Dominance doesn’t hold back anything at all—because, after all, if you’re the alpha dog, you can’t; every single thing you do has to be with intent and intensity alike—which is exactly what Spawn of Disgust achieve. While the band aren’t out to reinvent the wheel or change the way the listener thinks of heavy music, it certainly sets a benchmark for pure, seething aggression and arrogance. From the first seconds of “Alpha,” through “10-71” and “Stafford,” the instrumentation is a cohesive unit, layer after pummeling layer, of pure wrath. With deep, cavernous drums and a kick-drum that roars like an entire arsenal battery, the percussion throughout Dominance is thick and gritty, not overproduced or glitzy, but quite the opposite—coating in grisly, raw filth that drowns the listener, especially when combined with the low, lurid bass work that serves as a firmament to anchor the lower end of Dominance‘s dynamic. Together, the drums and bass sit like concrete, but hit like a freight-train—the gnashing, furious amalgam of an unstoppable force slamming into an immovable object that hits again and again and again until the listener is clinging to life; a life they lose the second the heavily hardcore-influenced, brash guitar hits. “Alpha,” the bitter and sharp introductory track, sees a condensed take of everything Spawn of Disgust are about—including some relatively straight-forward but still skull-splitting fretwork that takes heavy hardcore, slam and scattered bits of death metal, deathcore and punk to blend them all together into a bottom-heavy, brutalizing beatdown experience. Leave it to tracks like “10-71” and “Dominance” to prove it—as when the band’s guitar is put in the context of the crushing low end and churning percussion, Spawn of Disgust’s violent and visceral instrumentation is crystal clear.

Dominance carries on its trend of overt, immense aggression when it comes to their vocal element—one that draws heavily from good ol’ beatdown hardcore and combines it with subtle touches of hardcore punk and low, grisly death metal alike. With a grisly, bitter mid-range yell that dips into low bellows and raw-throated barks when needed, Spawn of Disgust use straightforward lyrics and frill-free vocal styles to deliver belligerent, brutalizing ignorance from start to finish—ignorance, which, opens up the band to a criticism. First things first, I’m not here to be a social justice warrior, nor am I here to write an essay on what’s politically correct. You aren’t here to read it and I’m not here to write it. However, in 2017, it seems a little unnecessary to pepper several tracks with “faggot.” I get it—Spawn of Disgust are tough, gritty, and frankly don’t give a fuck—and my criticism isn’t to wag my finger at the band for adverse language so much as it is to, in part, question whether it’s really necessary and, additionally, give fair warning to those who may be legitimately offended by it. With that aside, Spawn of Disgust are, doubtlessly, tougher than nails, and lyrics like those on “Stafford” reinforce it, especially in turn with the abusive and aggressive, tactless vocal stylings.

Dominance reigns supreme when it comes to ruthless, brass and care-free crushing music. Where the relatively simplistic nature of the EP may open itself up to criticism from those seeking something a little more technically prominent, and the relative overuse of homosexual slurs might turn others off, it’s doesn’t try to be a crowd-pleaser, nor do the band go out of their way to include technicality into their style (it’s beatdown, for God’s sake). Dominance exists only to oppress and obliterate the listener’s sanity—something it does excellently, even if it doesn’t reinvent the genre’s figurative wheel. If you’re in search of something to dominate your gym playlist, then you need look no further.

For Fans Of: Bodysnatcher, Desolated, Open Wound, Chamber of Malice