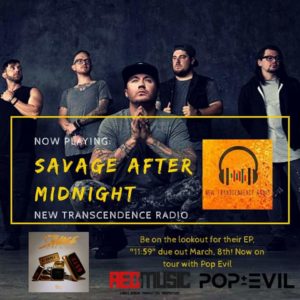 New Transcendence Radio recently apoke with leadman Shi Eubank of Savage after Midnight and he revealed the monotonous adventure of switching multiple labels and the relief of finally being able to release their music and through dogged perseverance and unyielding determination which are  qualities shared by countless bands struggling to break out from their hometown club scene and onto the arena stage. Memphis, Tennessee quintet Savage After Midnight have exhibited far more patience and dedication than most as they’ve geared up for their debut EP release, “11:59” on RED
Music/The Century Family on March 8th, 2019.

Since the band members formed in 2009, Savage After Midnight have been sidetracked by an obligatory name change, a
studio fire, scrapped recordings from different producers, a crippling lawsuit they had nothing to do with and an 11th
hour record label change.

“We’ve been put through the wringer, man,” says vocalist Shi.“We’ve totally been fed through it. If it’s true that what doesn’t kill us makes us stronger, then we must be the strongest band in the world.”

The years of trial and error, and even more years of being uprooted and returning to square one made Savage After
Midnight a more professional band, improving their chemistry and allowing them to fine tune their presentation both
live and in the studio. The band connected with producer John Falls (Egypt Central) and recorded what would become
the “11:59” EP.

Check out the Official Video for “10 Feet Tall” here:

The band’s “work-hard-by-day, rock-harder-by-night” ethos is poured into a collection of songs that arean energized, emotional introduction to musicians that desperately want to make a mark, but only on their own terms. Savage After Midnight music is aggressive, but still has pop sensibilities. The tracks are colored by galvanic hard rock passages, a contrast of screamed melodies and soaring hooks, and it’s augmented by electronic segments that give the band a
modern edge.

“10 Feet Tall,” the first single and video release from the EP is already making inroads at SiriusXm Octane and Music
Choice. It’s anthemic and energizing, building from a melodic verse, through a propulsive bridge and into an unforgettable chorus. “Unleash,” the opening cut on the EP, is a message of empowerment in the face of adversity, driven forward by steady backbeats, chugging guitars and electronic effects. “Heartless Machine” is an intense song about soldiers who are sent to war and desensitized, trained so that they will obey commands that civilians never have
to contemplate.

Savage After Midnight has toured with Shinedown, Sick Puppies, and Story of the Year, among others. They are setting
up the release of “11:59” with a leg of East Coast dates opening for Pop Evil. More tour dates are being confirmed, and the band also has additional songs recorded for another EP to be released in late 2019 or early 2020.

Living up to the band’s name, leader Shi admits:

“We all like to get wild. There’s something savage about us when it comes to throwing down and partying – it’s just who we are. We work really hard, but at the end of the day we’re down for a good time. We’ll put on whatever work hat we have to, but once it strikes midnight it’s our time – and it’s time to
tear it up!”

2019 will be the year that Savage After Midnight tears through the rock world and at long last, makes it mark.

Savage After Midnight On Social Media

The video for the title track “Unbreakable” can be seen here: https://youtu.be/ih3P7W9rV3o

“This new album and single is three years in the making and features the best material we’ve ever created. Being broken, disconnected, kicked to the ground…and still having the will to get up, fight, and learn from it is the spirit of Unbreakable. And I think you can feel that in the music, the artwork, and everything about this new album” says Brandon Davis.

The band’s previous independent releases include two EPs Shutdown Sequence(2013) and Sunset Wasteland (2012). Their music has been distributed worldwide via all major online retailers, and has been heard on Sirius Octane, Pandora, and several terrestrial radio stations in the US.

Hailed as “one of the most exciting new bands I’ve come across in quite some time” by Laurie Steele of 92.3 KOMP rock radio (Lotus Broadcasting) in Las Vegas and called “a revival of hard rock” by Eventful.com, the band is known for energetic live shows, gritty rhythmic guitar, & socially conscious lyrics that explore the darker side of the soul.

Listen to both of these bands interviews and music on the newest episode of NTR at the link below: