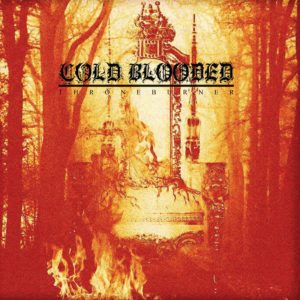 Blunt, brutish and without remorse—those are just some of the things that might come to mind when you think of the traits implied by calling someone cold blooded. Acting with precision and finality—without emotional involvement or superfluous contemplation—the traits of a calculating, divisive and definite individual. So when it comes to the overwhelming aggression and pure absence of pity or relent that is present on Throneburner, one could hardly think of a more appropriate name for Washingtonian gritty, grind warriors Cold Blooded. While Throneburner is an infernal and incinerating display of all-consuming, comprehensively crushing blackened grind, Cold Blooded act with the perfunctory, punishing precision of a trained killer, creating a sprawling, bleak soundscape only to bring it crashing down on the listener’s head. Delightfully grimey and polished enough to let the grooves and riffs slide into the listener’s head, Cold Blooded’s 2017 full-length release is devious and devastating from start to finish.
One part anthemic, evil black metal, one part powerviolence infused hardcore and one part pure, pissed grind, Throneburner uses an entire arsenal of various takes on heaviness to obliterate the listener. Percussionist Curtis Bytner is indeed as the band’s Facebook claims—an animal, in the primal sense and the spastic, Muppets-esque sense. Songs like the rampant opener, “Throne Burner,” and the energetic aberration “House of Wrath” see Bytner acting with impressive speed, blasting away at anything that gets in his way. Meanwhile, “Forever War” and “Wilderness of Mirrors” sees Bytner drawing a heavier influence from sludge, stoner and black metals alike—creating looming, spacious foundations that find extra grit and girth by the slinking, snappy bass tones from Matt Simmons. Simmons’ filthy and heavy bass tone is what keeps much of the thrasher, grindier elements of Throneburner anchored, working like an anchor tied to the fingers of guitarist Chris Williams. Simmons’ work on “Forever War” is especially noteworthy—contrasting the soaring, dissonant brays of Williams’ guitar and working with Bytner to craft a brutal and dark low end. Meanwhile, faster songs see Williams taking off at a mile-per-minute, weaving together metallic riffs and hardcore-influenced, immense breakdowns while Simmons is relegated to the background, working with Bytner to ensure every kick drum smack hits the listener like a sock filled with quarters. Somewhere between the likes of Nails, Trap Them and Converge, Cold Blooded’s cruel instrumentation is skin-shredding and abusive in ways grind-o-holics will surely appreciate.
Just as shrill and scathing as Throneburner’s grindy roots is the voice of Cold Blooded’s frontman, Ethan Kennedy. Kennedy, who doesn’t seem to know the meaning of tactful or mild, roars and wails incessantly during both the brutalizing and low, languishing moments and the rip-roaring, riff-driven segments. “Forever War” or “Wilderness of Mirrors” sees Kennedy at his most intelligible, with grating, repeated roars that ablate the listener’s sanity. Meanwhile, “Throne Burner” and “No Hope = No Problem” just see Kennedy letting loose, regardless of what he’s saying or who can understand him. With low bellows and piercing screams alike, Kennedy is talented but whimsical, letting the mood of the song and the overarching atmosphere of the moment dictate his style and candor, giving Throneburner an unorthodox feel that fits the organized chaos that defines the band’s musical efforts.
Cold Blooded create a rough-around-the-edges, eviscerating and dismal take on blackened grind that is actually fairly accessible—which in and of itself is one hell of a feat. Drawing from a spectrum of metallic and extreme influences (including a couple at the more absurd ends of hardcore and powerviolence), Throneburner is blistering and intense, taking no prisoners in its quest to thoroughly oppress the listener. However, where the band run into problems is with the sheer number of interludes abundant on their length release. Out of ten tracks, three of them are true interludes, in addition to the last two-or-so minutes of “Wilderness of Mirrors” which sort of…fades into nothingness. Ultimately, these interludes are a mixed blessing. On one hand, Cold Blooded are an extreme and intense act—the “breaks” are nice, and they help add to the dismal band dreary mood that gives Throneburner its singed, blackened touch. On the other—why? With a relatively brief release, it feels as if three (and a half) interludes might be doing just a little too much, detracting from the aural onslaught and snapping the listener out of the atmosphere that permeates every orifice. Ultimately, Throneburner is a solid release for lovers of extreme music and even those who find themselves just getting into the more intense and abusive styles of extreme metal and core—lighting a blaze in their hearts and ears that is nigh unquenchable.