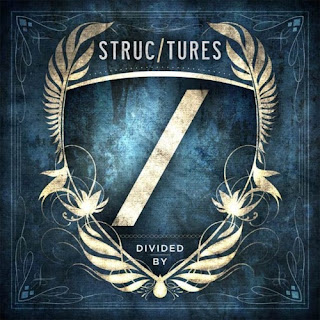 Band: Structures
Album: Divided By
Rating: 4/5
Buy: Amazon
iTunes
Tracklist:
1. At Las[t]
2. Hydroplaning
3. Encounter…
4. Paralyzed____
5. In Pursuit Of
6. Clockwork (feat. Alex Erian of Despised Icon and Kevin McCaughhey of Ion Dissonance)
7. Relapse;Signs (feat. Frankie Palmeri of Emmure)
8. Tunnel Vision
9. I.N.T.E.N.T.
10. /
Canadian 5-piece progressive metal outfit Structures is a band that was out there making a name for itself long before they inked to Sumerian Records in early 2011. They recorded and self-released a 5-song EP titled All of the Above, which was released shortly before their signing and were touring and destroying cities all over Canada. Now they’ve toured the US and pretty much the whole world, making them a force to be reckoned with. I’m not a stranger to heavy, in your face angry metal, but I have to say this one threw me for a loop when I heard the clean vocals. Honestly, I’d have left them out if I were them but they still fit pretty well on the album. Divided By sees guest vocalists Alex Erian of Despised Icon, Kevin McCaughhey of Ion Dissonance, and who else? Frankie Palmeri of Emmure…the king of getting guest vocal spots lately. Overall, this album has a very angry feel to it which I love to see on a metal album, but it also hits home with some killer lyrics (too many to cite so I’ll post a link to them at the end of the review).
Key Tracks:
Encounter…: One of the original 5, re-recorded for use on the album, this happens to be my 2nd favorite song on the album. “Make it a mission to be the change you want to see. Lay down the foundation and where you wish to be.” Seems to be a message to all those bitching about their lives all the times and just sit back on their asses letting the world collapse around them. It’s a message to take life by the balls and do something about your life instead of just sitting back and watching everything crumble around you.
Relapse;Signs: This is my favorite track on the album, not only because it features Frankie, but because it’s the hardest hitting of the 10 songs, in my opinion. Seems to me, the narrator is waking up and realizing what a hell this world has become. He’s remembering his dream world and what it was like before all of the wars over nothing. It brings to mind the same question we all are asking ourselves and the government; If we got rid of the person causing the main problems, what are we still fighting for? I’m a big advocate of defeating terrorism, but I, like so many other Americans, think that enough is enough. We’ve got to make our voices heard. We’ve got to give the world the wake up call that it so desperately needs before it’s too late.
Final Thoughts:
This album is heavy, in your face, features amazing guest vocalists, and the band is on a great label. Need I say more? The lyrics are meaningful, the instrumentals are perfect, the breakdowns are all in the right spot and not in great numbers, the only reason I decided to give this album 1 less star than what it truly deserves is because of the clean vocals. They are in the right spot, but they don’t fit in with the overall theme of the album, in my opinion. In any case, you don’t have to take my word for it, go pick up your copy of Divided By out on Sumerian Records now!